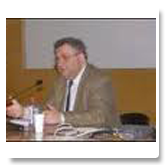 Georges-Jean Pinault is professor of linguistics at the Ecole Pratique des Hautes Etudes in Paris (Sorbonne) and faculty member of the department of Sciences historiques et philologiques. He is one of the leading experts on Tocharian languages and has published widely on Indo-European linguistics. He is co-editor of the journal Tocharian and Indo-European Studies (Copenhagen). He has published several editions of Tocharian manuscripts and inscriptions, and a handbook which contains a grammar of the two Tocharian languages as well as selected Buddhist and secular texts with translation and commentary: Chrestomathie tokharienne. Textes et grammaire (Leuven-Paris, 2008). His interests are in comparative and historical linguistics, combined with philology and cultural studies. He has published numerous articles about topics that are relevant for the reconstruction of the Proto-Indo-European (PIE) language. He is famous for the statement of a phonological rule concerning the evolution of laryngeals, which is named after him as Pinault's law. Besides Tocharian, Old Indo-Aryan is his favorite area of research. He has published extensively about phonology, morphology, syntax, semantics and etymology of the Vedic language. As related areas of interest, one can mention the history of Indian grammatical tradition and the research about language contacts in South Asia and Central Asia. He has compiled the bibliography of the works of Renou: Bibliographie des travaux de Louis Renou (1896-1966), as supplementary to the Bulletin d'Etudes Indiennes 12-14, 1995-96 (Paris, 1997). The following paper is representative of his scholarship in Vedic linguistics and poetics: "About the slaying of Soma: uncovering the Rigvedic witness", in Indologica Taurinensia Ya. Elizarenkova Memorial Volume, Moscow (Orientalia et Classica. XX), 2008, pp. 353-388. One of his most recent Vedic studies deals with the Yama/Yamî hymn of the Rigveda: "Sur l'hymne védique dialogué de Yama et Yamî (RV X.10)", in Yama/Yima. Variations indo-iraniennes sur la geste mythique, Paris, Publications de l'Institut de Civilisation Indienne, 2012, pp. 139-178. The complete bibliography can be found on the web site of the French research group UMR 7528, http://www.ivry.cnrs.fr/iran-inde. He was elected as Treasurer of the IASS in January 2012.